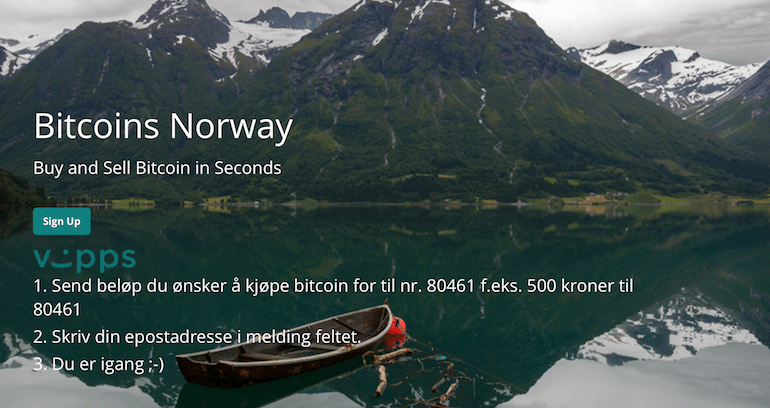 The “Land of Midnight Sun”, Norway has stepped ahead of many countries when it comes to Bitcoin adoption. According to a user on Reddit and the Bitcoins Norway website, people in the country can now buy Bitcoin directly through Vipps Payment Application.

Vipps is one of the widely-used payments application in the country. The platform operated by DNB ASA — Norway’s largest financial services group now allows people to pay for their Bitcoin purchase on Bitcoins Norway cryptocurrency exchange. The platform offers its service to customers from across the world. Until now, Bitcoins Norway was accepting deposits through SEPA and SWIFT channels. Customers could deposit fiat currency in euros, Norway kroner or US dollar denominations.

The inclusion of Vipps option makes it easier for the users to buy the digital currency instantly. The conventional payment methods involving SWIFT and SEPA transfers take anywhere between two to five days for the amount to be credited to their Bitcoins Norway’s account, only after which they could buy the digital currency.  The inclusion of Vipps support on Bitcoins Norway also allows people to indirectly use credit and debit cards to fund their Bitcoin account.

The DNB Bank Group’s portfolio includes a range of corporate, retail and securities offering. In addition, the platform offers various financial products including Vipps for domestic individual customers.  By making deposits and withdrawal through Vipps application, Bitcoins Norway customers stand to gain additional benefits in the form of reduced fees.

Bitcoins Norway, on its website, claims that the company is a socially owned platform where the ownership is distributed among its employees and customers. The socially responsible platform also claims to support charitable institutions in the region for the benefit of the lesser privileged in the society.

With the increasing popularity of digital currency, many electronic payment platforms and banking institutions have started to offer its services to cryptocurrency platforms. Earlier, it was not the case and most of the platforms had to completely rely on direct cash deposits and wire transfers into their accounts.

BitStarz Player Lands $2,459,124 Record Win! Could you be next big winner?
Tags: bitcoinBitcoin Newsbitcoins norwaydnb bankNews
Tweet123Share196ShareSend
Win up to $1,000,000 in One Spin at CryptoSlots