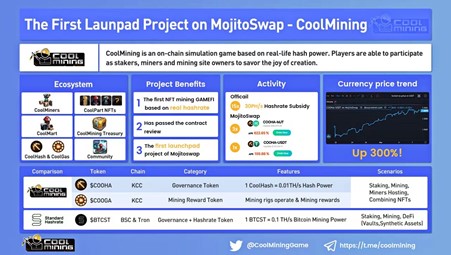 Ultimate Beginner’s Guide to CoolMining: the Only GameFi that Rewards Players with Actual BTC

As an open-world mining simulation GameFi, the mission of CoolMining – an on-chain simulation game that is built upon real-life hash power, is to empower the community to participate in PoW mining in a decentralized manner. It was first launched on KCC (KuCoin Community Chain).

Starting off the year of 2022, while the crypto market is waiting to pick up, NFT and on chain games took the lead of an active rebound – Axie’s native game Token SLP has risen for six consecutive days, while PlaceWar’s governance Token PLACE has risen for four consecutive days, with the highest single-day rise once by 73%. Although the overall market sentiment seems to be experiencing setbacks, investors remain positive since the metaverse narrative has huge potential.

Debuting as KuCoin’s first IGO (initial game offering) project (on February 25, KuCoin officially announced that CoolMining will be open for trading), CoolMining has been widely welcomed by the market. During the pre-IGO activity on February 21, the CoolMining tokens valued at $180,000 was sold out only within 3 minutes at the price of $0.6 per token, joining Axie Infinity as the most popularized project.

In addition to the collaboration with KuCoin, CoolMining has also announced the cooperation with BitMain, Antminer Pool, a21x as well as a set of other leading institutions, significantly accelerating the build-up of the CoolMining ecosystem.

This article is the ultimate guide for beginner miners and players to start and enter the CoolMining GameFi world.

What is CoolMining and Its Birth

14 years after Satoshi Nakamoto’s Bitcoin Whitepaper though, ordinary computational equipment lost their places in the mining scene due to the short of specialized mining rigs, which are expensive to purchase, maintain and operate. The current crypto mining landscape is consisted of 4 major types of players in a highly centralized way: mining rigs manufacturers, big miners, mining farms and mining pools who jointly control the majority of global bitcoin hashrate.

CoolMining is an on-chain simulation game based on real-life hash power. In the CoolMining world, there are a variety of ways for players to possess computing power. Various occupations are also available for players to choose, players are able to participate as stakers, miners or mining site owners, immersing themselves into the mining world vividly from different perspectives. The most exciting part is – it is the first Gamefi project with NFTs backed by real life assets. All hash power in the game corresponds to real-life hashrate. Every player has a chance to earn BTC rewards via playing the CoolMining game.

In order to enable all junior miners to enjoy an authentic mining experience without having to bear the noisy environment and complex operation one could encounter in real crypto mining process, the CoolMining project decides turn mining, a hard-core and complicated business, into a much more fun journey – which is the simulation game based on blockchain.

How to start playing CoolMining

There are two ways to start playing the CoolMining game:

All of CoolMining’s gaming mechanism is realised on-chain through smart contracts that are audited by Certik.

CoolHash is an ERC-20 token, representing real world hash power. Every CoolHash is equivalent to 0.01TH/s hash power. It is also the governance token of CoolMining Community.

CoolGas is another ERC-20 token working as the utility token in the GameFi ecosystem with unlimited supply. It is the mining reward token as well as the energy consuming token. Miners consume CoolGas tokens as the mining rigs operate. At the same time, miners get BTC rewards and CoolGas as mining rewards. In addition, mining hosts will receive a portion of CoolGas paid by hosted miners as custodial fees.

In CoolMining, there are two types of NFTs, one is CoolPart NFT and the other is CoolMiner NFT.

The CoolPart NFT will be minted in the form of Mystery Boxes via official website. There will be 4 types of CoolPart NFTs, assigning different attributes to CoolMiner NFT:

At least one hash board and at most four non-duplicated components, one from each type, are required to mint a miner.

As for CoolMiner NFT, players can get it either through minting using CoolPart NFTs or purchasing CoolMiner NFTs directly in the CoolMarket (the official NFT marketplace of CoolMining).

All CoolMiner NFTs are unique miners minted by players by combining CoolPart NFTs together. The performance of the miners is determined by the attributes and rarity levels of composing parts.

What’s more exciting is, players can even disassemble the minted miners into original components.

CoolPart Mystery Boxes will be available to mint with CoolHash via the project’s official website.

Essential Hash Parts contain only hash boards while Elective Hash Parts include control board, power supply unit and cooling system. Players would need at least one hash board and at most four non-duplicated components, one from each type to mint a miner.

Essential Hash Parts Mystery Boxes will include hash board CoolPart NFTs of three rarity levels, R/SR/SSR. The hash board determines the fundamental hash power of a miner.

Each part has three level of rarities and assigns different attributes to the miners. For more details, visit: https://docs.coolmining.io/how-coolmining-works/mystery-boxes

CoolMart is the official NFT marketplace for players to exchange mystery boxes, miner accessories and miners.

Players can acquire better accessories through trading to modify or upgrade their miners, enhancing performance and maximising rewards.

Total BTC rewards is calculated based on real world total hashrate. Rewards corresponding to CoolMining hashrate will be distributed to BTC rewards pool on a 24h basis after cost of production is deducted and accumulating. Players are able to claim their share of the BTC rewards anytime.

In order to start mining using a miner, players need to own a miner either by purchasing on CoolMart or building a customized miner in the Miners Lab.

When players have thier own miners, either via minting or purchasing, they have new hashrate credentials. Holding CoolMiner NFTs means the ownership of corresponding hash power. Players need to stake CoolMiner NFTs to boot the miners and start earning.

During miners operation, players need to prepay CoolGas as energy cost to earn BTC rewards and the mining rewards in CoolGas.

(Note: Miners Lab is an experimental site for players, where one is able to inspect accessories and miners in stock and willingly assemble or disassemble to maximise one’s return, and vice versa. For assembled miners, players can first disassemble the miners into its original components and replace with better accessories to achieve optimal results.)

Miners hosting is for the most advanced players in CoolMining to play. Mining sites’ business model is to provide miner slots to help accelerate rewards earning and meanwhile charge miners fixed portion of rewards as custodial fees. For more details, visit the Whitepaper.

BTC rewards pool is calculated real-time based on the aggregated hashrate in the real world. Rewards corresponding to CoolMining staked hashrate will be distributed to BTC rewards pool every 24-hour after cost of production is deducted. Rewards accumulate over time and players are able to claim BTC rewards at any time.

CoolGas is calculated as mining rewards. Certain amount of CoolGas will be mined each day to intensify miners’ participation, which then will be distributed to players according to the hashrate at stake in proportion to the total hashrate in the ecosystem.

While the overall crypto market continues to see fluctuation, investors seem to favor quality GameFi projects like Axie and CoolMining.

For people who are passionate about BTC mining but not sure where and how to start, the CoolMining is definitely worth a try. You earn while you play and can learn basic mining knowledge and skills like an actual miner. . Its roadmap to be listed on major leading crypto exchanges is regarded as a promising sign for many.