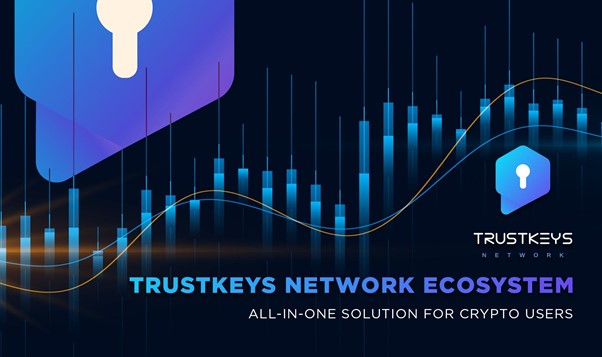 CryptoNoCurrency app TrustKeys has officially announced a date for its upcoming IDO and public sale. TrustKeys, founded by TKblockchain Corporation, disclosed via its team that the platform’s IDO would take place from 27th – 28th October 2021. However, its presale launch will be opened earlier, between 20th – 26th of October, on the TrustKeys exchange to enable investors to purchase its native token TRUSTK, which would be used to participate on the day of its IDO.

Investors dreaming of participating in the launch will need to purchase at least $20 worth of TRUSTK. The token can be bought on the exchange in the TRUSTK/USDT and TRUSTK/WBNB currency pairs. Metamask and Trust wallet users can add their wallets to the platform for storage.

TrustKeys Aims to Provide an Intuitive Web Experience to Users

In the past few years, DeFi has churned up several great non-custodial wallets, such as Metamask, Frontier, SafePal, and Trust wallet. These three wallets have defined the growth of DeFi and solve the various problems facing the space. However, none of these DeFi projects have provided a decentralized way of social networking, whereby users can send messages and share vital pieces of information. TrustKeys, a new non-custodial wallet, can perform that and even more.

TrustKeys Network isn’t about just trading or building a conventional wallet. TrustKeys Network is all about inclusiveness. It’s building an ecosystem for users, where they can do more than just trading. The SuperApp is a true definition of that. The app aims to make it more convenient for users to access different functionalities in one place, instead of depending on multiple applications.

The SuperApp has a dedicated social media functionality that allows the sending of messages from one user to the next in an end-to-encrypted format. This means that chats are secure, giving the users maximum privacy and peace of mind. In addition, chats are automatically erased after a certain period to boost security. Users can interact in the crypto space straightforwardly, similar to Facebook and WhatsApp.

Apart from the social media integration, users can send and receive cryptos and trade on the HEX exchange, a hybrid of DEX and CEX. The exchange has the features of a typical crypto exchange, where buying and selling of digital assets take place, and enables the creation of non-custodial wallets. Security is tight as well. Users are given a 24-character private key instead of the conventional twelve to keep their accounts secure.

TrustKeys Network is owned by TKBlockchain Corporation that builds technologies and provides services for people to connect, build communities, and develop their businesses. TK Blockchain Corporation was founded in June 2021, with its headquarters in Intershore Chambers, Road Town, British Virgin Islands.