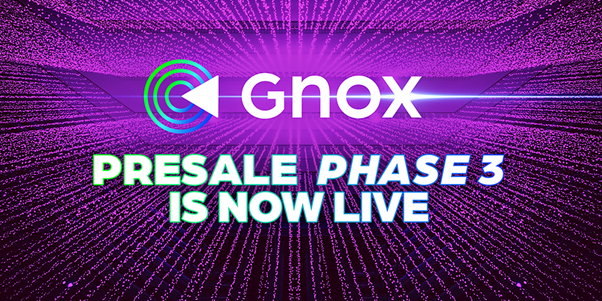 Gnox’s massive presale sell-out has caught the attention of investors from all over. The project’s creative approach to bridging the crypto and fiat worlds while demonstrating the advantages and usability of the DeFi world to the general public has greatly fueled the buzz surrounding Gnox.

Gnox, one of the first reflecting tokens to employ yield farming, gives holders of $GNOX access to a portion of the higher return yields that the Treasury can obtain from other protocols in exchange for the service. With Gnox, producing passive income is as easy as buying, holding, and receiving an automatic earnings return.

The initial coin offering for Gnox is divided into three stages. Each round of sales offers a third of the token’s presale supply. Phase 2 ended on July 12; phase 3 is currently underway. There is a presale through August 12th. Less than a week later, the Gnox platform makes its official debut. All unsold tokens will be burned prior to that.

After the initial launch, monthly burns guarantee that there will never be enough Gnox tokens. Additionally, current Gnox holders receive hourly airdrops of Gnox tokens, so you can essentially sit back and watch your stacks get bigger all day long.

Bitcoin had formed a continuation correction bearish flag pattern after failing to break the $19K significant support level and had been consolidating inside.

Looking ahead, the 100-day moving average (currently at $27K) and the flag’s upper boundary will likely be the next major resistance levels for Bitcoin’s price.

This is a crucial blockchain network indicator because it shows how many projects, protocols, and decentralized applications (dApps) are available on the platform.

Thanks to its scientific, rigorous approach to blockchain technology, Cardano was proud to reach over 1760 days without a network outage. In contrast, Solana had two complete outages in June alone.

But while DeFi llama only lists 12 projects made with Cardano, Solana lists 70.

Lastly, amid the last two months of uncertainty in the crypto market, Fantom continued its downward spiral under the influence of a descending trendline.