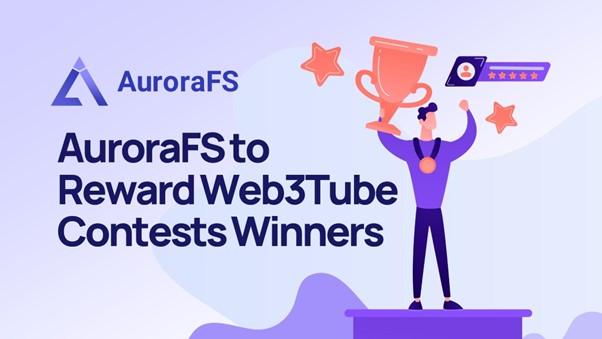 AuroraFS P2P cloud storage and distribution network recently conducted a series of campaigns and contests which were partially aimed to drive further pre-launch awareness to the first ever fully decentralized commercial video storage, sharing and streaming platform – Web3Tube. The primary incentive for client and user engagement was the reception of future AUFS token airdrops. The AuroraFS native token will be rewarded to all content creators who took part in the Web3Tube contests which measured most unique channel subscribers and most likes to uploaded videos.

The two specified AuroraFS Web3Tube promotions ran from March 27th through April 23rd. Winners were ranked differently in each contest, with the top 300 creators being added to the list of AUFS airdrop recipients in the subscriber challenge. It also hosted four rounds of competition, while the likes challenge measured the top 1,000 creators over seven shorter rounds, and rewarded 1-30 AUFS tokens depending on finishing position in each measured round.

AuroraFS launched the Web3Tube contests and campaigns in order to operate the Web3Tube platform in an open, public forum. This strategy allowed for the Gauss Aurora Lab team, contributors to the development of the platform, to observe the network while fully operational.

The contests allowed such without interruptions or the shelter of a controlled environment. This made it possible for issues to be captured, contained, and ultimately addressed prior to the AuroraFS mainnet and token launch, which is expected some time in Q3.

As a benefit to individuals on the other side of the platform, the Web3Tube contests gave creators the ability to feel the Web3Tube operation real-time. The underlying AuroraFS was also under close observation during the subscriber and likes contests also, since Web3Tube is a fundamental element in the network’s decentralized ecosystem. Web3Tube exists and runs atop the independently developed and operating AuroraFS decentralized content and data network. The video quality and bandwidth availability on Web3Tube are both features that have not been seen in the decentralized space until now.

Web3Tube video content storage and playback platform does so in HD clarity, which offers a considerable advantage to serious video content creators. Increasingly, video and all other forms of content creation are becoming recognized as highly competitive, viably lucrative industry and market sectors.

Since this is the case, creators are becoming more technically savvy and selective when deciding platforms to engage and build on. These decisions are based on several elements and measurable variables which creators look to control to some degree, because it takes skill and time to develop followings. The strength and design of the network is extremely important for this reason.

Another factor that distinguishes Web3Tube

Web3Tube is the first fully decentralized content network with the ability to deliver such high quality video playback. Web3Tube gives creators and platform viewers a large amount of bandwidth, made accessible because of the underlying AuroraFS global data resource pool, which brings to light another unique point that distinguishes Web3Tube.

Due to the decentralized nature of the AuroraFS network, broadband mining is required to power the decentralized ecosystem. Content creators and anyone on the network for that matter, is free to engage in broadband mining on the AuroraFS data distribution and P2P cloud network and earn AUFS rewards consistently. Instructions to download the latest version of AuroraFS are available on the central AuroraFS github account.

There is still one live AuroraFS Web3Tube campaign that is measuring flow energy, a metric that calculates the total viewing time any given node in the decentralized network completes. The viewers who watch the most content on Web3Tube will be rewarded with AUFS token airdrops, the same as the subscriber and like contests. Other than this remaining live competition, the AuroraFS network is regularly conducting contests and giveaways typically related to continued exposure of the network’s Web3Tube and other utilities being developed on the commercial-grade decentralized network. Anyone can download the latest version of Web3Tube to join the decentralized network leading up to the live full launch, which is expected soon.

Contests and all other news can be regularly followed through tuning into AuroraFS social media channels, setting alerts, and also following the group Telegram community channel. The option to interact in real-time exists in this particular communication medium, and individuals are often able to get the answer to their questions by moderators and other community managers right there on the spot in many cases. Contests are also often announced first on the Telegram channel. Future AUFS airdrops will be rewarded to all subscribers and likes contest winners within coming weeks.