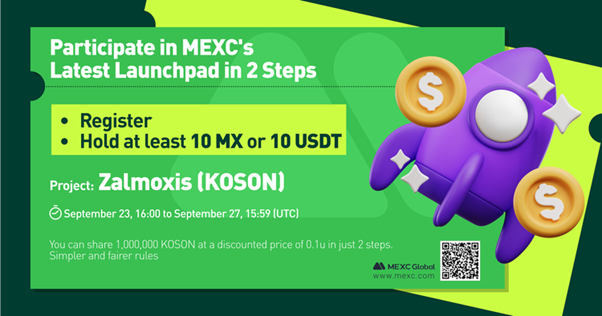 From 16:00 on Sept. 23 to 15:59 on Sept. 27 (UTC), the cryptocurrency trading platform MEXC will hold the latest event on its launchpad. The event project is Zalmoxis (KOSON), a AAA-level massively multiplayer online role-playing game (MMORPG) game developed by Wenmoon Studios Ltd.

It is known that MEXC’s launchpad is specially launched for MX holders, and MX holders can get the opportunity to participate in the project early. A total of 1 million KOSON will be released in this event, and the price will be 0.1 Tether (USDT). During the event, anyone with MX or USDT holdings of more than 10 USDT can sign up to participate.

The launchpad will still implement the sharing mechanism, and users can share KOSON by registering for this event. The maximum single exchange amount of KOSON is limited to 100,000 MX or 1,000USDT.

According to the introduction, Age Of Zalmoxis is a third-person MMORPG based on the Elrond blockchain built with Unreal Engine 5. The game is set in an ancient fantasy world inspired by European folklore with dungeons and thousands of quests. Players create characters and gain experience through combat, narrative content, events, crafting, dungeons and other means to grow and create a fantasy version of the kingdom of Dacia.

Players can obtain two different types of nonfungible token (NFT) characters for free from the marketplace or from guilds. Players can develop their game characters by gaining combat experience, creating different stories, winning tournaments and many other ways.

The game has two narrative models: adventures and organic content. The adventure narrative guides players to grow and obtain corresponding rewards according to the growth of the character; other players create unique new content through the newly generated content of the game. Players can also build different structures, such as castles, by acquiring a certain number of land plots. These can be used throughout the game or staked to generate tokens that drive the game economy.

In MEXC’s previous launchpads, several projects such as GameFi projects Genopets (GENE), CropBytes (CBX) and decentralized sharing platform Dtravel (TRVL) were launched. They all performed well after their launch on the secondary market.

In addition, according to the MEXC event announcement, KOSON will be launched on the secondary market after this event ends. KOSON’s trading and mining activities, namely the trade-to-earn mechanism, will be launched as well. During the event period, users who trade KOSON will receive KOSON rewards.

MEXC is the world’s leading cryptocurrency trading platform, providing one-stop cryptocurrency trading services for spot, exchange-traded funds, futures, staking, NFT Index, etc., and serving more than 10 million users worldwide. The core team has a solid background in traditional finance and has professional financial product logic and technical security guarantees in terms of cryptocurrency products and services. In October 2021, MEXC Global won the title of “Best Cryptocurrency Exchange in Asia.” Currently, it supports the trading of more than 1,400 cryptocurrencies and is the trading platform with the fastest launch speed for new projects and the most tradable categories. Visit the website and blog for more information, and follow MEXC Global and M-Ventures & Labs.