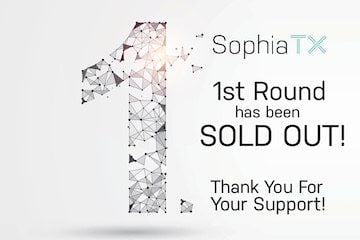 SophiaTX TGE – Successful Round One

After 48 hour delay caused by CryptoKittens clogging ethereum network, SophiaTX successfully launched its Token Generation Event yesterday (Dec. 7th). The first round’s milestone (30 Million SPHTX tokens) of SophiaTX TGE has been achieved in just over 24 hours. The TGE will last a total of 5 rounds (approx 10 days) and will distribute 150 Million tokens to participants by the end.

Currently, this is one of the most successful Token Generation Events in December, despite the volatility in the crypto market right now with Bitcoin hitting another all time high above 18K today (according to coinmarketcap.com charts), but then plummeted nearly 3K in just a matter of hours taking most of the alt coins down with it! In the midst of this rapid value drop-off, SophiaTX has been able to raise more than $7.3 Million in only the first day of their TGE. This gives testament to the projects solid foundation, making it one of the most interesting and promising projects to come out this year.

SophiaTX was created by Equidato Technologies AG, a Swiss joint venture company combining the blockchain expertise of DECENT with the business experience of Venaco Group. They have developed their own proprietary blockchain, based on DECENT’s technology, tailored for integrating enterprise applications, such as SAP, to businesses of all sizes.

“The SophiaTX project is premised on an in-depth analysis of the technological capabilities of existing blockchains, to ensure a strategy and a platform which can add value and provide businesses with not only suitability, but also superior functionality and features.” explains  Jaroslav Kacina, CEO of SophiaTX. “The resulting platform and its focus on adoption in real business, is one of the most innovative advancements of blockchain into the way in which the businesses and their customers interact and how ecosystems are continuously re-defined by digital technology.”

The project has extensive media coverage and is gaining traction in both business and blockchain communities. They are preparing to launch an early adoption program for businesses and technology professionals to explore the capabilities and possibilities of the platform, catered specifically to their companies needs.

If you want to partake in one of the most successful TGE’s of December, you can find all the information, including guides for how to register and participate, on the SophiaTX website.

SophiaTX is a blockchain platform and marketplace for businesses of all sizes, and the first open source platform to primarily integrate blockchain technology with enterprise applications such as SAP, Oracle, and others. 74% of transaction revenue worldwide touches SAP systems, and SophiaTX provides a business-appropriate blockchain for B2B collaboration and communication.

Tags: blockchain technology
Tweet123Share196ShareSend
Win up to $1,000,000 in One Spin at CryptoSlots