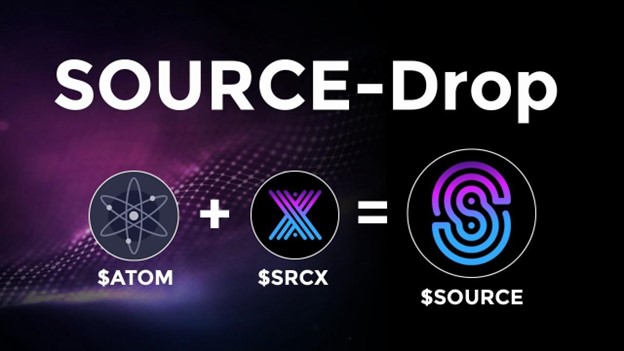 With an intelligently-designed airdrop, a focus on enterprise development and partnerships, and cross-chain functionality, the $SOURCE Blockchain is poised to quickly rise amongst the industry’s biggest and best.

On Thursday, August 4th, Source Protocol Ltd announced the test net launch of the next standout blockchain to hit the crypto market and the Cosmos ecosystem. Built as a highly efficient, scalable and permission-less blockchain network for interoperable dApp development, $SOURCE is bringing a Binance Smart Chain-based DeFi ecosystem and strategic enterprise partnership development to the Interchain. $SOURCE will be publicly-available for enterprises, developers and individuals to create and use scalable dApps, smart contracts and tools for Web 3.0, DeFi, NFTs, P2E, privacy networks, DeSci, and more.

According to the team’s CEO, innovative plans have been set in motion to introduce new market share to the blockchain industry at large, with $SOURCE and Source DeFi Suite’s focus on bridging the gap between existing Web 2.0 solutions and Web 3.0. These plans already involve building infrastructure for mortgage data servicing companies, a top tier metaverse, white-labeled DeFi banking services, among others. The $SOURCE team is also currently working with partners to establish a strong presence in many regions including the United States, Dubai, Central Europe,  South America, and Japan. The $SOURCE testnet is already onboarding dozens of validators in preparation of the chain’s airdrop and mainnet launch later this year.

A New Approach to Airdrops is Needed

A blockchain’s airdrop plays a critical role in establishing a strong foundation for the chain at the date of genesis. A successful airdrop bootstraps a blockchain’s decentralization to a large group of engaged users while simultaneously inviting them to contribute and participate in the new community network.

All Cosmos Hub blockchains have different strategies on how they approach their genesis distribution airdrop. There is controversy in how airdrops are done as $ATOM “whales” typically continue to receive the majority of each new project’s tokens, and users continually find ways to skirt the rules or “game” the airdrop. This limits distribution and decentralization at genesis. For example, if there is a whale-cap (which limits the amount of coins that can be distributed to any individual wallet address in an airdrop), people can spread their $ATOM to multiple addresses, and therefore avoid the impact of any whale cap. They can later consolidate all of their tokens and have a significant advantage over other delegators. This allows them to diminish the project’s value by continuously liquidating their staking rewards. The $SOURCE team is familiar with these greedy and malicious practices, and has designed a unique airdrop model that will be the most rewarding for the already existing and active #SourceForce community.

The $SOURCE-Drop airdrop has been carefully designed to provide maximum benefit to Source Protocol community members that already hold both Source Token $SRCX (Source Protocol’s Automated DeFi market rewards token, BEP-20) and Cosmos Hub $ATOM. SRCX should be held in decentralized wallet like Metamask, Trust or Binance Smart Chain wallet, and ATOM should be held in the Keplr wallet. Registering both your ATOM and SRCX wallet addresses in the Source Web 3.0 app via wallet connect will be required in order to participate.

The $SOURCE-Drop will be whale-capped and will not be game-able. The amount of $SOURCE claimable will be determined by the combined average wallet weight of a holder’s ATOM and SRCX balances. Wallet weight is determined by the proportion of a user’s wallet holdings to circulating supply. If no SRCX is held, a zero will be registered in the calculation and this will significantly reduce the quantity of $SOURCE received for ATOM stakers that do not hold SRCX. This creates a scenario where even the largest ATOM whales will receive significantly less $SOURCE than a participant that also holds SRCX. Likewise, SRCX holders that do not register an ATOM address on the claiming app will not be able to receive the $SOURCE-Drop as a Cosmos Hub $ATOM address is needed (via Keplr wallet) to generate the new $SOURCE blockchain public address.

***ATOM and SRCX held on centralized exchanges will not be eligible for the SOURCE-Drop.

Multiple snapshots of SRCX and ATOM will be used to calculate the amounts claimable. No snapshot dates will be announced to avoid any gamification. This rewards the true believers and community members of both ATOM and SRCX that are holding long term. This strategy is designed to enable a truly decentralized Web 3.0 ecosystem, rewards those who are loyal to the vision of Cosmos Hub’s “internet of blockchains” and #SourceForce communities, and to create a greater appreciation for recipients of the $SOURCE-Drop.

Contributors and participants to the $SOURCE testnet will also be eligible to receive bonus $SOURCE from active participation such as creating a wallet, setting up a validator node on $SOURCE testnet, launching a smart contract, etc. Additional contributions and active participation by community members will also be rewarded. For more information about the $SOURCE blockchain, click here.

To prepare for the SOURCE-Drop, be sure to install the Keplr wallet and use it to store your ATOM. Source Token (SRCX) can be purchased on PancakeSwap and stored in Trust Wallet, Metamask, or Binance Smart Chain Wallet. Visit the Source Protocol website here to follow the tutorial if needed