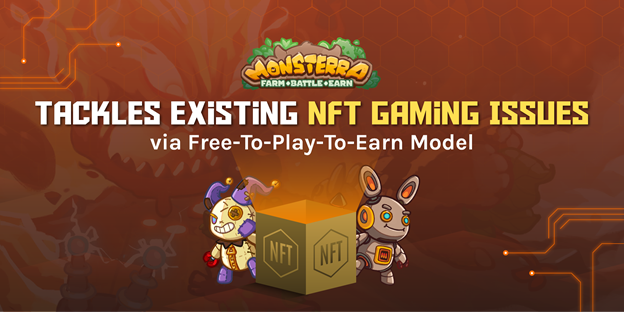 The gaming industry is going through a dramatic evolution. The rise of NFT gaming has led to an explosion in play-to-earn games whereby players can earn and own digital in-game assets to sell at their discretion.

Monsterra seeks to change all that with a free-to-play-to-earn model that lets gamers play and earn for free without imposing any upfront cost. While earning is a central part of the game to incentivize player loyalty, the focus is on building an exciting and inspiring gameplay experience to keep it fun. It is also designed with an innovative dual token model to slow down inflation and sustain a balanced in-game economy. Also, users pay no gas fees to get started with Monsterra, instead only paying a transaction fee when converting their assets into NFT items.

Monsterra is a dual chain-based game on the Binance Smart Chain & Terra networks, inspired by the gameplay of Axie Infinity, Clash of Clans, and Boom Beach. Set in a fictional world, Monsterra revolves around farming, property building, and battling other lands and players using magical creatures known as Mongens, guardians of Monster Terra.

Each character’s stats are calculated via unique DNA codes based upon race, traits, and rarity figures. Rarity is further classified into common, uncommon, rare, epic, and legendary, with Mongens leveling up to improve their skills over time and an unprecedented breeding mechanism to create hybrid characters.

To connect plots, users need to use a land framework defined by several rarities and diverse themes with different limitations on development. There are various methods for users to acquire land, which can be individually customized and farmed to produce an in-game currency used to feed and nurture the Mongens and train their troops.

Monsterra applies an innovative dual token model, utilizing MSTR and MAG to ensure the sustainability and scalability of the in-game ecosystem.

MSTR is the primary Monsterra token, used for transactions like purchasing land, marketplace items, or other in-game activities, with a limited supply of 100 million.

Users can stake MSTR, as well as NFTs, in innovative staking pools and yield farms to receive rewards from the game as a shared revenue stream while still being able to use the assets for game activities. Players also need MSTR to participate in the governance of the Monsterra DAO.

MAG is a secondary token used across Monsterra. It has an uncapped supply regulated via a burning mechanism. The MAG token can be minted via quest completion, battle victories, and DAO voting. It is then burned via gaming activities including breeding, evolving, fusion, skill learning, and plot upgrades.

To get started in Monsterra, players can claim free in-game items including one default land and two Soulcores to incubate for new Mongens. They can then engage in a series of game activities across four different battle modes, nurturing their Mongen squads to expand territory and earn rewards from battle victories.

In Adventure Mode, players send Mongen squads to explore and attack new lands for hidden reward tokens. Players land in NPC territories and use tactical strategies to overcome obstacles and extract maximum resources from the soil.

Boss Challenge Mode players lead Mongen armies to conquer surrounding lands inhabited by dreadful beasts. If victorious, the land will belong to them, and their territory further expands.

In this mode, players take on other players, raiding their lands to obtain the resources of opponents as rewards for winning Mongen battles. If attacking players fail, they will have to pay rewards to the successful defensive landowners.

Arena Mode allows players to enter arena battles, fighting it out against other Mongen squads to win betting rewards. Players participate by betting a fixed amount of MAG tokens. The winner receives the full amount, and the loser is deducted a 5% fee for the game.

Monsterra’s INO and IDO are anticipated by the end of the year. Q1 2022 should deliver an NFT marketplace, staking and yield farming services, and the DAO, alongside the launch of Adventure Mode. The remaining battle modes are expected to be delivered between Q2 and Q3 2022 before Monsterra scales up to become multi-chain and multi-platform.