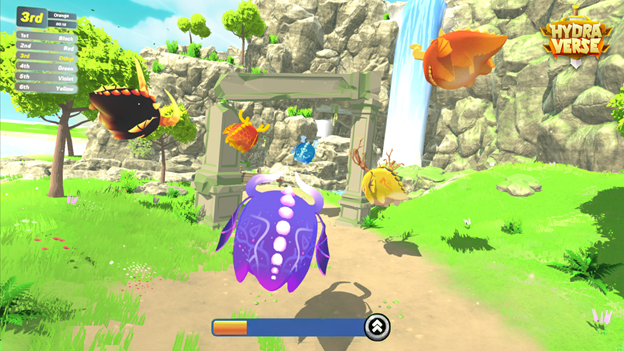 The metaverse is rich with independent digital economies and ripe with bountiful opportunities for users to play to earn (P2E).

It’s estimated that electronic gaming through blockchain technology will become one of the biggest growing sectors in crypto and gaming. When the efforts of a Top 10 blockchain company and a Top 10 gaming company combine, players are rewarded with HydraVerse.

The Hydaverse will be an immersive digital world with AR and VR capabilities. Players can race, train, breed, trade, and even rent their NFT dragons to other players.

The HydraVerse is a metaverse play-to-earn PVP dragon racing game, where the dragons are NFTs. Players can hatch, train, and race their dragons at the racetrack along with other mini games. Dragons begin at level zero and the maximum level is 40.

Dragons can be showcased or staked at the Dragon Park while they’re resting up for the next big race. Players can purchase money trees from the shop and plant them in the park to earn passive income. In addition, dragons can play in the fountains to level up.

Players will even be able to show off their NFT dragons to their friends using AR and VR technology.

The native token of the HydraVerse is called “Hydracoin” (HDV), built on Binance Smart Chain (BSC). As a result, players won’t be burdened by high transaction fees since BSC is a fast, scalable and cost-effective network.

Hydracoin has a supply of 500 million tokens that will be used to facilitate commerce in Hydraland.In addition,  HDV holders are eligible to join the rewards programs where players can receive free NFTs and other prizes.

HDV will be used to breed, train, and buy NFT dragons. Completing daily tasks will result in players earning HDV.

Not only will HDV be used for in-game transactions, but players will be able to stake and LP using their HDV tokens in staking and farming pools.

In a race, six dragons race against one another to win the prize lot. The player controls the dragon to avoid obstacles and accelerate into other dragons to knock them off course to slow them down. Spectators can bet on the outcome of races, while players in the race cannot.

There are many different racecourses available for players to race. In addition, racetracks have a fixed number of races per day to ensure that the prize money will provide the winner with a handsome reward.

Another exciting feature is the racecourses are available for players to rent.

Players who rent a racecourse can earn up to 70% participation fees from races held at their course. The racecourse tenant can invite other players to race or set different policies to attract riders to use their course.

HDV, BNB, and BUSD are all accepted when renting racecourses

Training Your Dragon to Win

For citizens of Hydraland to get their dragons, they must purchase eggs from the store and hatch them. Each egg yields a unique dragon to the player.

The higher the tier of the dragon, the higher value the dragon will have on the NFT marketplace. If a dragon is weak and possesses a low star count, it can be combined with others into a more powerful dragon.

There are three tiers of dragon eggs:

Once the dragon egg hatches, the player must spend time training and playing with their new companion. The dragon will be strongly motivated when receiving a high happiness rate, which helps increase the player’s win rate.

The NFT traits are the characteristics of dragon’s that determine their race performances and auction resale value:

Awakening dragons evolve their stats and morph their appearance. To awaken a dragon, the player must purchase materials from the shop. Awakened dragons unlock new skills such as speed while accelerating, diving, and increased stamina.

Once the dragon is ready to race, players can send them to the training course, where they can earn HDV. This way, the player can play to its dragon’s strengths when racing against others online.

The Bright Future of Hydraland

Those who are early adopters of the first metaverse dragon racing game will not log off empty-handed. Hydraland presents gamers with a wide variety of opportunities to earn while racing and playing with their dragons. The HydraVerse team is collaborating with established launchpads that allow retail investors to gain exposure to the HydraVerse through initial DAO offerings (IDOs).

After tokens are fairly distributed, early adopters can stake their HDV tokens while preparing for the game to launch fully. Fortune favors the brave, and those who join the HydraVerse will reap the benefits of early adoption.