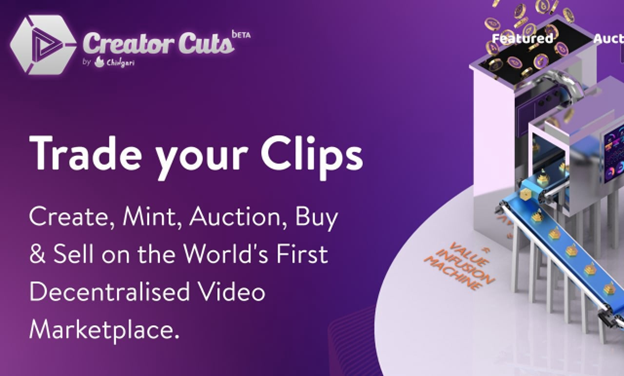 Powered by blockchain and non-fungible token technology, Web3 stands poised to disrupt the way content creators monetize their work, pulling the rug from under the corporations that previously called the shots. Leading the charge is India’s fastest-growing on-chain social app, Chingari.

With Chingari’s social token, GARI, powering its revolutionary feature set, the app is now pioneering the use of vNFTs as a mechanism for monetizing content via the Creator Cuts marketplace. This world-first in social media looks set to shake up how content creators earn from their work by wresting control back from the corporations that continue to dictate revenue streams across Web2.

Creator Cuts is a decentralized vNFT marketplace that operates on the Solana network and is part of the rapidly expanding Chingari ecosystem. Chingari was launched in November 2018 and experienced parabolic growth, particularly following an Indian ban on TikTok in 2020 and, later, its innovative blockchain integration. Today, the platform boasts over 130 million users, with more than 5 million individuals signing on daily to enjoy short video content.

Creator Cuts is Chingari’s latest foray into the world of Web3. Using the ecosystem’s native cryptocurrency GARI, platform users can buy, sell and mint vNFTs as they would on any NFT marketplace. The platform operates on the Solana network, meaning users benefit from low-cost transaction fees and lightning-fast settlement times.

Chingari launched a beta version of Creator Cuts in August 2022. Initially, the team selected 100 of its top creators to pilot the scheme but plans to roll it out to more users soon. For now, each of the chosen creators can mint one vNFT and sell it to their followers.

The idea behind vNFTs is to foster a closer relationship between content creators and those that support them. Consistent with the Web3 ethos, Creator Cuts empowers its users by granting full control over their creations and extending them the means of monetizing them directly. Meanwhile, it also rewards a creator’s most loyal followers.

While the idea of buying, selling, and minting NFTs is nothing new, Chingari has integrated additional features to ensure a more vibrant, circular creator economy. Chief among its innovations is the ability for vNFT holders to share in their favorite creators’ financial successes.

Chingari users generate revenue via a process known as “GARI Mining” Users creating content and interacting with videos across the platform receive GARI Mining rewards from the project’s Community Reserve.

Holders of Creator Cuts vNFTs automatically start to receive a portion of its creator’s total platform revenue as soon as they buy their video clip. Rewards are fixed at 10% of the creator’s overall daily revenue and are paid each day in GARI tokens. This dynamic should ensure significant demand for vNFTs from the platform’s most popular creators. Additionally, it will spur on creators to produce more of the content their fans love — meaning everyone’s a winner!

Alongside these innovations, Creator Cuts itself is a powerful NFT marketplace. Its video clip listings fall under various categories, such as “dance,” “sports” and “cooking,” and the “Trending” section makes browsing for the hottest vNFTs quick and easy. In its beta release, the platform’s primary market functions via an auction mechanism, ensuring creators are adequately rewarded for their efforts.

As one of the core tenets of Web3, decentralization is also key to the Creator Cuts platform. Although Creator Cuts is an NFT marketplace, users are not tied to the platform itself and vNFT holders will earn rewards regardless of whether they are a Chingari user or not. Simply holding the vNFT in a Solana-compatible wallet is all that’s needed to benefit from the efforts of the creator you support. Meanwhile, secondary market trading of vNFTs will be supported at all Solana ecosystem NFT marketplaces.

After connecting a wallet, you can dive in and explore Creator Cuts’ vNFTs and start generating GARI tokens by liking, sharing and creating your own video clips. Already supporting a fully working product and home to millions of users, Chingari’s Creator Cuts platform stands as an early example to the rest of the emerging Web3 ecosystem, demonstrating just what’s possible with this disruptive, empowering tech.

Is it Too Late to Buy Ripple? The Potential Effects of the End of the Pending Lawsuit