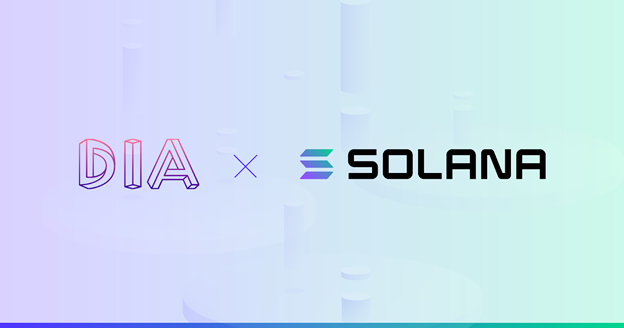 DIA Announces Yet Another Integration. This Time on Solana

The open-source oracle provider DIA announced that it is integrating its oracle services with the layer 1 blockchain Solana. This deployment enables developers on the network to leverage DIA’s data to build new decentralized applications.

Solana went live with its beta network in March 2020, yet it has already positioned itself as one of the leading blockchain networks, as of today locking a total value of approximately 15 billion USD.

Solana already supports a large number of DeFi solutions, including decentralized applications and smart contracts, as well as non-fungibles tokens. Solana uses a consensus mechanism that combines proof-of-history (PoH) with proof-of-stake (PoS), enabling the network to process more than 50,000 transactions per second. In comparison, the Ethereum network can only handle 13 transactions per second.

Solana was designed to achieve high network operability with low transaction costs with its combined consensus algorithms of Proof of Stake and Proof of History. This tech stack is set to overcome the scalability issues of networks such as Etheruem, which depend on a volatile network fee for its block confirmation mechanism.

DIA has been heavily broadening the availability of its data infrastructure. In recent weeks, DIA has deployed its oracle on a number of ledgers, including Polygon, Polkadot, BSC, Moonbeam, Arbitrum, Celo, Avalanche, NEAR, Shiden and many others.

The vast majority of decentralized applications including those on Solana require data external to the blockchain to operate. These applications are dependent on the right calculation of price points in order to avoid being exposed to data manipulation and exploitation such as flash loan attacks, potentially resulting in investor losses.