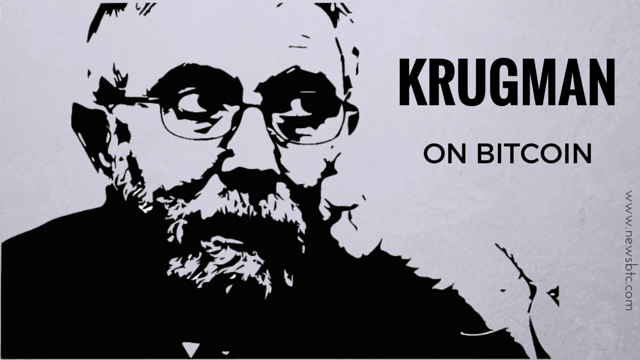 If you and I are ready to settle our trade in Bitcoin, this technological marvel is here to stay.

But even a nobel award winning — and stubbornly ideological — economist like Paul Krugman has to be explained this very simple fact. The poster child of traditional finance system has once again tried his very best to besmirch Bitcoin, while repeating the age-old rhetorics related to the digital currency’s longevity as a value-holding asset.

The comments come during a show, ironically called “The Genius of Economics”, where Mr. Krugman is asked about his views on the disruptive digital currencies “such as Bitcoin” and how they refute the idea of government-backed currencies. With a few public laughs that come after this question is asked, the economist begins with saying that “Bitcoin is not looking too good”, a statement that takes everything — that is said afterwards — to the south.

“Money is a pretty amazing thing,” he stammers and states. “Why does a piece of green paper with a dead president on it have value? Ultimately, it’s because other people believe it has value, and [it] circulates. However, there is an anchor for dollar bills which is not gold. It is the fact that you can use it to pay taxes.”

“And then you have someone try creating Bitcoin which has nothing in the end. It’s a purely self-fulfilling prophecy; it is purely levitating on itself, which is not impossible but is kinda unlikely. And I have to say that Bitcoin really looks like a bubble in multiple senses. Its a technically sweet solution to a problem, but it is not clear that the problem is one that has much economical relevance.”

Krugman goes on rubbishing Bitcoin by indicating it as an inessential payment solution, saying that the world already has platforms like credit cards and their monetary system currently already has billion dollars of “ones and zeros” for doing the same thing Bitcoin does.

The Bitcoin community has criticized Mr. Krugman for distributing groundless propaganda against the digital currency. As many believe, including us, the celebrated economist is too immersed in his own narcissistic thoughts that makes him blind enough to see Bitcoin as something more than a value holding asset.

For instance, his opinion on the digital currency being an inessential payment solution literally evokes laughs. He fails to realize that whether Bitcoin is a reliable store of value or not, most people do not hold it for too long. The payments are easy to make, and are also backed by the real time exchange infrastructures, like BitPay, that protect merchants from Bitcoin’s price volatility.

Meanwhile, Krugman’s opinion on treating taxes as the anchor to prove value further evokes ‘rofl’ — a slightly animalistic version of laughter. He wants to imply that if a government will start accepting Bitcoin as a means of tax payments, then only it will be termed ‘legitimate’. By the same logic, Gold is illegitimate as well.

Krugman never speaks of the growing Bitcoin industry. He never cares to mention blockchain and its adoption by some of the world’s leading financial institutions, and even governments.

The last time I checked, it only took a day for me to receive my cross border payment, thanks to Bitcoin. Why should I believe that the digital currency “is not doing good”?