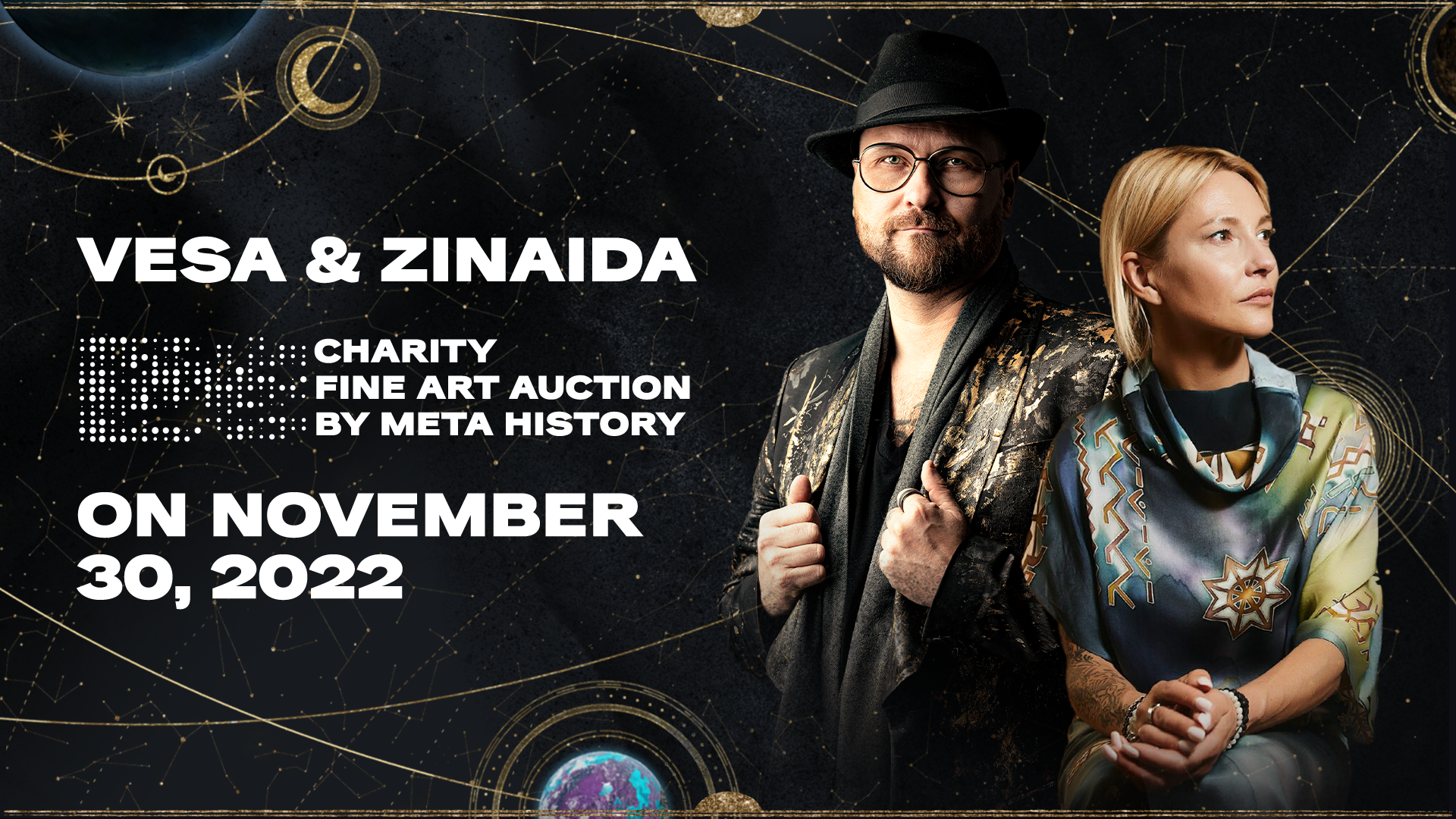 “I’m doing this as an artist who has some amount of influence to sell an artwork that can positively impact some devastated lives & heritage.

If this can help preserve culture, which my fellow auctioning artist Zinaida does with her art so well, it is a success.

It’s also in support of an incredible entrepreneur V K, who has built an incredible blockchain usecase with Meta History: Museum of War “.- VESA Auction participants will need a crypto wallet like Metamask with funds in it.

Where to take part in the auction?
Participate here

In one day we will open the auction of two world-class digital artworks. The artworks of their authors —   VESA and ZINAIDA — are kept in private and public collections around the world. If you become the owner of one of the artworks, your property will be appreciated by leading collectors and a wide audience.

Since the META HISTORY museum turned them into NFTs, you can show your property in the metaverse, online and offline galleries, museums, or the marketplace absolutely open to everyone. At the same time, you will always have proof that the original of this work belongs to you only!

This is an opportunity for a collector or investor to enrich their collection with something really valuable. Go to the site and set up a reminder about the start of the auction. So you will not forget to participate and, perhaps, become the owner of an extraordinary artwork that will only grow in value in the long term.

NFT pieces will be sold at an auction to be held on November 30th. All the money raised will be used
for the restoration of the cultural heritage of Ukraine. This is the primary mission of META HISTORY
— the largest charitable NFT project in Ukraine.

The sale of Vesa and Zinaida will be the first META HISTORYs fine art auction. Earlier works by some prominent Ukrainian artists have already appeared in the museum collections. For example, the 2nd drop of the “Warline” presented the artworks of Waone Manzhos, Sestry Feldman, Danya Shulipa, and Irene Neyman. The museum also has successful auctions, among which is selling the NFT cup of the Eurovision for 500 ETH.

Many in crypto are aware of this.

Rarely do we relate to having to do it all while rockets are being launched at your building though.

Tired of senseless NFT projects? We have something with real value for you. It’s time to turn NFT technology into a generator of a new world! Where it is most needed — in Ukraine. Millions of its citizens are suffering from the war. Hundreds of libraries, historical buildings, and architectural icons were affected. This is Meta History: A Museum of War.

In order for you to make sense about the work I am presenting to auction, I have to talk about the premise under which it was created.

It is not a pleasant work to look at. Through pain to transformation

When I started as a digital artist in 2008, the market was about to go down hard. I jumped out of being a filmmaker with a moderately successful production company to going heavy into debt, bankruptcy, and no prospects in 2010. I invested 20k euros to jump into my first show and soon discovered what it was like being married to a bloodbath of a market with a tiny art scene in Finland- despite the positive national press. I soon also realized that no work, even in film, was available. The pieces were not selling in any format, but the bills kept coming.

The museums would not have me nor did they understand what I was doing. Only one gallery took me on in Finland. This then collided in 2011 with me getting a slid S1 disk in my back as the debt collector letters kept coming. I was on five different prescribed opiates and painkillers, not getting admitted to the hospital via public healthcare, nor could I afford an MRI. After being in pain and unable to move properly for an entire year, my head was a complete mess.

Leaving my flat in minus 12 degrees Celsius, my car tires got stuck in the snow, and my chest was too exposed to the cold when I dug the car out. Sitting back into the car I felt a cutting pain. The next night, I started wheezing. A couple of days later, I was called an ambulance and arrived in hospital to intensive care. The doctors told me I had about 8hrs left to live without help. I had severe pneumonia and aqualung.

Somewhere in 2011, before the hospital episode, I produced this piece called Silence. It was about the insurmountable pressure I felt not being able to keep up with the bills, my relationship collapsing, my health deteriorating, and my mental state being completely off. I remember collapsing in the shower one morning, unable to get up simply from the pain being too much to bear. The day when I arrived in hospital, I held on to my iPad and started something important on that intensive care bed. After three days of intensive care, I got to realise I was going to live. This moment is not a good reflection on what went on before or after it was taken.

The Vision Of Gratitude As The Lifeline

After I started coming back from the morphine drip I was put on, I could pretty much only move my fingers and eyebrows, as everything else was stuck, incredibly sore, or numb. I started writing a list of things to be grateful for, if this was it for me. Intuitively I knew that this was either a moment where I help myself heal or leave this plane. After three days, I was transferred to the hospital’s normal side to await the lung surgeries. I kept writing that list, which to my surprise, was getting much longer than I expected.

In 2015, I had to leave Finland to escape the zero prospects, no help, piling debt collector letters, and useless bank accounts. The country is not a very friendly place to fallen entrepreneurs. I’ve been seeking to do alchemy with this artwork since. To somehow turn these sour lemons into lemonade. This is what this charity auction is all about. It is not a work that many will enjoy looking at. It reminds me of my version of Edward Munch’s Scream. It has a screaming wormed face with its neck pecked by an eagle. This is entirely in line with what many Ukranians now feel with the Russian invasion. By donating this piece, if successfully auctioned, I hope to remedy some part of my story as well as theirs. Somehow turn an overwhelming disaster into something useful. To transcend the situation to real help I so badly needed at the time as well.

The work of Zinaida Work Silence Mode by artist ZINAIDA with her text:

Nowadays, peace has been replaced by a silence mode – when the heart skips a beat due to fear and anticipation. In my video works I use mixed techniques, creating a complete image, and in Silence Mode one of the important details is an accessory ̶ an ancient handmade Ukrainian wreath with goose feathers, which was created in one of the villages of western Ukraine, but now this tradition has been lost.

Overlaying special effects on the photo of the girl in the form of a veil for the bride, as if it is “smoky” due to current events in Ukraine ̶ flashes, explosions and fires. I am grateful that I was able to empower this work with the energy of interaction through cooperation with the Finnish artist VESA.

I’m in this simply to try help to preserve some of the Ukranian culture and potentially, in some small way, help transform some of this mess into something constructive.

Hope to see you at the auction, if this mission calls you.

We showed up to make it possible and hopefully the sacrifices are felt.

I want to thank Brittany Kaiser for introducing me to V K, and his efforts to help his country.

I keep being an ambassador for the project.

Auction participants will need a crypto wallet like Metamask with funds in it.

Where to take part in the auction?
Participate here