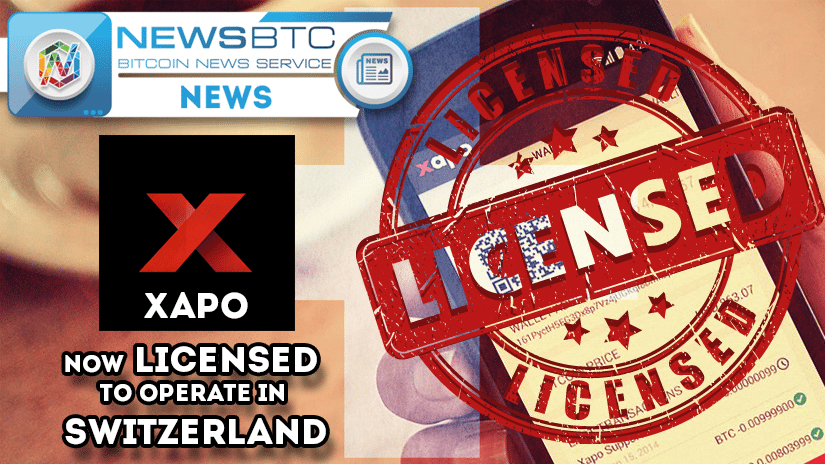 Xapo is back in the news again. The leading Bitcoin wallet service at one time has received conditional approval from the Swiss Financial Market Supervisory Authority (FINMA) to operate in the country.

The receipt of approval was announced by Xapo’s CEO Wences Casares in his recent blog post. According to Cesares, his company has been negotiating with the Swiss authorities for over two years to be recognized as a financial intermediary. He was quoted in the blog post saying,

“After almost two years of substantial effort and investment, Xapo has received conditional approval from the Swiss Financial Market Supervisory Authority (FINMA) to operate in Switzerland.”

The approval will enable the company to serve non-US clients from its new base of operations in Switzerland. Xapo was earlier headquartered in Palo Alto, California, before its offices were shifted to Zurich, Switzerland in May 2015.

According to a report on one of the leading business magazines, Xapo has been designated by Swiss FINMA as a financial intermediary. This designation will allow the company to operate without a full-fledged banking license which otherwise will be quite expensive.

Even though Xapo is not the first cryptocurrency company to operate from Switzerland, its business as a wallet service provider seems to have raised questions about the requirement of banking license. However, the requirement was waived after the company explained that it doesn’t accept deposits directly from its customers.

FINMA’s conditional approval requires Xapo to gain membership of a self-regulatory organization, as stated by the Swiss anti-money laundering regulations. The company is currently in the process of fulfilling those requirements.

The business magazine’s attempts to gain further information about Xapo’s case from FINMA met a dead-end after the agency declined to comment on an individual company’s status. Meanwhile, the Swiss authorities, in a bid to attract more companies, have been working on simplifying the cryptocurrency and blockchain regulations. Some of the leading names in the industry have already set up shop in Switzerland, and in the coming days, with Brexit around the corner, it intends to take London’s place as the next European Financial hub.

Tags: Bitcoin Newsbitcoin walletfinmalicenseNewsswitzerlandxapo
Tweet123Share196ShareSend
Win up to $1,000,000 in One Spin at CryptoSlots